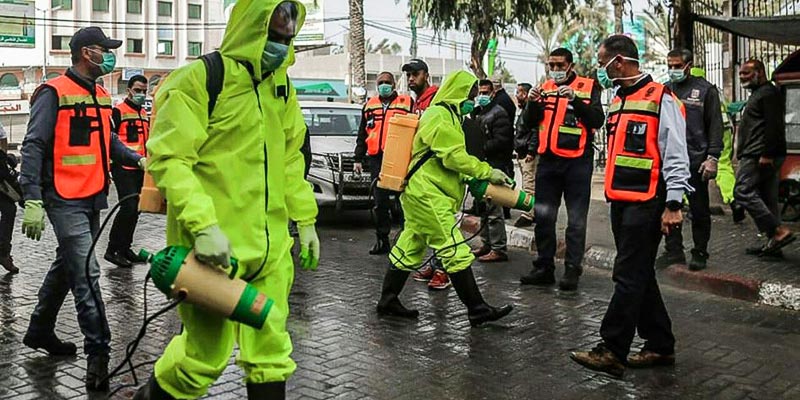 The current coronavirus pandemic has placed great responsibilities on governments to provide necessary guidance, testing, and regulations regarding social distancing and treatment of those who are infected. Governments also are required to ensure the delivery of medical supplies, masks, respirators, and hospital beds in large quantities to meet the needs of the populations in their charge. As cases of COVID-19 are confirmed in the Gaza Strip and fears of its rapid spread in that densely populated area increase, Israel’s legal and humanitarian obligations toward Gaza and its population become salient and take center stage.

Under customary international law, the duties of a belligerent occupier toward the civilian population are very clear and include ensuring law and order and public safety. The Fourth Geneva Convention specifically codified and detailed the responsibilities of an occupying power in a situation akin to the current one by stating that: “to the fullest extent of the means available to it, the occupying power has the duty of ensuring the food and medical supplies of the population. It should, in particular, bring in the necessary foodstuffs, medical stores and other articles if the resources of the occupied territory are inadequate.”

There is no question that Gaza’s medical resources are extremely limited and its hospitals, already under great strain, are woefully deficient and cannot meet the requirements of this pandemic. There are some 60 ventilators for a population of two million people, and Israel has provided only 200 testing kits for COVID-19. Ghada Majadle of Physicians for Human Rights-Israel has put the responsibility on Israel “by virtue of international law to provide the required means to the Health Ministry in Gaza.”

Israel not only has failed to live up to its responsibilities of providing for the needs of Gaza’s civilians, it has also added to their hardship by the crippling siege it has imposed on the strip since 2007.

Israel not only has failed to live up to its responsibilities of providing for the needs of Gaza’s civilians, it has also added to their hardship by the crippling siege it has imposed on the strip since 2007, severely limiting economic activities and controlling all exports as well as the import of all goods and supplies, including food, medical provisions, fuel, and building materials. According to B’Tselem, the Israeli human rights organization, “[a]fter decades of occupation in which it avoided any investment there, and after more than 12 years of blockade, Israel has turned Gaza into the biggest open-air prison in the world.” It has also impeded the ability of civilians and their families to seek medical care outside the Gaza strip for cases that cannot be handled there. Through its control over the border crossings, Israel’s military determines who can leave to seek medical care in Israel, the West Bank, or farther afield in Jordan.

The department of the Israeli army responsible for issuing or withholding such permits is the office of the Coordinator of Government Activities in the Territories (COGAT). While COGAT exercises full control over many aspects of Palestinians’ lives in Gaza and the West Bank, the official position of the Israeli government has been that since its removal of Jewish settlers and redeployment and withdrawal of its ground forces from the center of Gaza in 2005, Israel’s occupation of Gaza ended at that time; therefore, power and responsibility for the people of Gaza devolved to the Palestinians themselves. Furthermore, since Gaza came under the control of Hamas in 2007, Israel announced that it considered Gaza a “hostile entity” and felt free to impose sanctions on its population as a means of pressuring or punishing Hamas, which it considers a terrorist organization.

The argument that Israel has “disengaged” and “withdrawn” from Gaza and is therefore not accountable is no longer a rational or appropriate one to make.

The argument that Israel has “disengaged” and “withdrawn” from Gaza and is therefore not accountable—which has currency in Israel and is repeated by some of its supporters abroad—is no longer a rational or appropriate one to make. Indeed, no countries around the world have accepted such a stance and all continue to view the Gaza Strip as well as the West Bank as under occupation. While Israeli forces withdrew from the city centers and delegated some power to Palestinians, they remain—and act—very much as occupiers. The fact that Hamas, unlike the Palestinian Authority, is much more antagonistic to Israel does not change this reality. In the words of Shannon Maree Torrens, “That Israel denies that it is an occupying power in relation to Gaza should have no effect on the international community holding it to account for responsibilities it has long neglected.”

The Occupation of Gaza Continues

While Israel has in fact redeployed its ground troops out of the populated centers and does not handle the daily affairs of Gazans, it continues to exercise very effective control, from the outside, on all aspects of life there. Specifically, Israel’s dominance is evident and exercised in the following areas:

In reality, therefore, Gaza continues to be effectively under Israeli occupation. The responsibility for protecting Gaza’s citizens from the spread and serious effects of the coronavirus must rest with Israel. Gaza’s Health Ministry has issued warnings about the epidemic and has appealed to Israel to provide necessary supplies in order to help stem the impact of the virus. To be sure, Israel must understand and implement its obligations toward Gaza’s citizens and abide by its responsibilities under the Geneva Conventions.

Jonathan Kuttab is a leading human rights lawyer and a Non-resident Fellow at Arab Center Washington DC. He is a resident of East Jerusalem and a partner of Kuttab, Khoury, and Hanna Law Firm there. He is the co-founder of Al-Haq, the first international human rights legal organization in Palestine, and of the Palestine Center for the Study of Nonviolence.